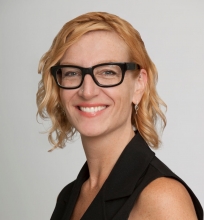 June 2021 Department of Linguistics commencement speaker Lesley Carmichael (PhD Linguistics 2005) joined Microsoft in January 2006 as a Program Manager in Speech.  At that time Microsoft was mostly looking for CSE rather than Linguistics degrees.  How she got her job there testifies to her resourcefulness and willingness to plot her own course in grad school.

When Lesley Carmichael entered the PhD program in Linguistics in 1997, she was interested in phonetics and phonology and knew she wanted to end up in the tech industry but at that time we did not have a computational linguistics program that could help her get hired at a company like Microsoft.  She credits getting her job at Microsoft to three main events.  The first was her decision to became an advisee of Richard Wright, who joined the Linguistics faculty in 1998.  Richard quickly made connections with other departments, and introduced Lesley to Mari Ostendorf (Electrical Engineering) and her lab, who were doing signal processing on conversational speech data. Lesley later performed prosodic labeling of parts of the Switchboard corpus for them.  Lesley also worked with Richard on a grant from IBM doing prosodic annotation of speech data in different speaking situations.  Her analysis of these corpora not only led to her dissertation research, it also led to the second fateful event, an internship with the Oregon Graduate Institute of Science and Technology (now Oregon Health and Science University) in Portland Spring 2003.  They were looking for an expert on prosody, and she analyzed and labelled children’s speech data for them. After finishing her PhD in 2005, Lesley took a few months off to travel around the world, pursuing job prospects through internet cafes en route.  One of these was at Microsoft, and this brings up the third event which she credits with landing her her job.  Her friend and colleague Jay Waltmunson, also a 2005 Linguistics PhD, was working at Microsoft in the Speech and Natural Language group.  He put Lesley’s resume on the top of the stack that the hiring manager was looking at, and pointed out her expertise in phonetics and prosody, explaining how that could benefit Microsoft’s speech recognition and text-to-speech development.

Currently Lesley is Principal Program Manager Lead in the Microsoft Search & Assistant Platform team for Compliance, Privacy, and Special Clouds. This team drives platform alignment of compliance commitments and component deployments to support accelerated S&A feature waves. This team also builds customer trust via horizonal workstreams and deliverables, such as coherent consent and privacy related features, and tools and processes to support compliance and successful audits. Lesley is also dedicated to making the tech industry a place where people of all backgrounds and intersections can feel they belong and thrive and lead.

Lesley’s commencement address touched on three themes:  uncertainty, inclusivity and lifelong linguistic scholarship, and can be viewed from 05:43 on in https://youtu.be/dzelXAv1YF8