Alicia Beckford Wassink’s PNW English study has since 2009 amassed a parallel corpus containing more than 5GB of spoken data from a multi-ethnic speaker sample including Washingtonians of Yakama, African American, European American, Japanese American and Chicanx background. The corpus is suitable for assessing ASR system performance because the same utterance is produced by speakers with different sociolects in different speech tasks. Automatic transcription was achieved using CLOx, a custom ASR service built on the Microsoft Speech Software Development Kit, created in the UW Sociolinguistics Laboratory. Wassink and her team of Linguistics grads and undergrads found differential performance for the different ethnicity-related accents. The phonetic error rate for the Caucasian American materials was 1.6 errors/100 words, 3.6 for the African American materials, 6.3 for the Yakama, and 6.6 for the Chicanx materials. These findings were reported at the February 2020 annual meeting of the American Association for the Advancement of Science, in a panel with UW faculty Emily Bender and Gina Levow and alumna Rachael Tatman. 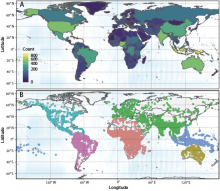 Ben Tucker (University of Alberta Linguistics) and Richard Wright (UW Linguistics) recently edited a Special Issue on Phonetics of Under-Documented Languages for Journal of the Acoustical Society of America (2020, v. 147, issue 4) on the phonetics of underdocumented languages, which disseminates information about the sounds of Nungon, Chichemec, Kalasha and 22 other less studied languages in linguistics representing 13 language families from five continents. As Tucker and Wright note in their introduction to the volume, “less well-documented languages, such as Georgian, Cantonese, and Kannada, make up only 4% of the papers [in JASA between 2017 and 2019]. It is worth noting that many languages lacking acoustic description are spoken by millions of people.”  In a companion article in Acoustics Today, Tucker and Wright point out that in order to understand what a possible human speech sound is, a large sample of languages is needed.  Even a language with a large inventory of sounds will not come close to providing an adequate answer.

The 29th Annual Meeting of the Formal Approaches to Slavic Linguistics, organized by Barbara Citko and sponsored by the Department of Linguistics, jointly with the Department of Slavic Languages and Literatures and Walter Chapin Simpson Center for the Humanities, met virtually on May 8-10, 2020 (FASL 29 website).  As Citko describes it, “the FASL conference, since its inception in 1992, has been one of the top conferences in the field of theoretical Slavic linguistics, attracting scholars from all over the world. Our initial plan was to host an in-person conference on campus; due to the COVID 19 pandemic, we pivoted to a virtual format. While the move to a virtual format presented some organizational challenges, it increased participation quite a bit: over 160 people registered for the conference, which must be a record for FASL! The conference program consisted of 28 presentations and posters, which dealt with a wide range of topics within Slavic syntax, semantics, phonology, acquisition, historical and corpus linguistics. Additionally, the conference featured three keynote speakers: Peter Jurgec from the University of Toronto, whose talk looked at the learnability of Slovenian palatalizing suffixes; Asya Pereltsvaig from San Francisco State University, who spoke about relationship between anaphor binding and word order in Russian; and Ljiljana Progovac from Wayne State University, whose talk examined predication from an evolutionary perspective.”