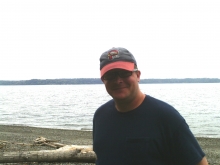 In December 2021 Ben Jones successfully defended and filed his dissertation, The Spatiality of Perceptual Dialectology, supervised by Betsy Evans.

Jones’ dissertation focused on language attitudes and ideologies towards English in the state of Maine. Respondents in Jones’ study were asked to use the Folk Linguistic Online Mapping tool developed by Betsy Evans to draw regions of Maine after being given these instructions: “Is it possible to tell where in Maine someone is from based on the way that they speak? Please draw regions on the map where you believe people speak differently. After drawing a region, please provide a name that you believe represents the way people speak there.” After considering linguistic features identified by respondents, the results were then aggregated and analyzed with regards to social, psychological, and physical aspects of Maine's geography, using David Britain’s spatiality framework. In addition to considering spatiality in his analysis of non-linguists' perceptions of dialects in Maine, Jones also considered their intergenerational connections and lived experiences interacting with other Mainers and Maine's geography.

The image provides an example of the social and physical dimensions of analysis conducted in Jones’ dissertation. Maine has two Congressional Districts (upper left portion of the image) that are geographically and socially distinct. The Second Congressional District contains a significantly more rural and isolated population. There are few major highways connecting most of that region to the rest of Maine (or any other state). The area is also generally less connected to economic centers of New England and is heavily reliant upon the fishing industry following the closure of Maine's mills and other production centers during the last thirty years (leaving the interior region of the district largely without an economy). Nonetheless, residents of this part of Maine strongly view themselves as embodying the "true" identity of Maine life, so much so that in 2010 a state representative from this region introduced legislation to split the state into two new states (with the Second Congressional District retaining the name Maine). This social and geographic distinction is reflected in people's perceptions of linguistic differences in the state, where areas roughly the same as the First Congressional District are labeled with names such as "Urban dialects" and "Not Mainers- people 'from away.'"