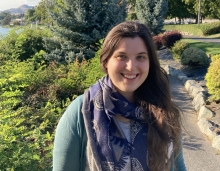 Congratulations to Anna Moroz, who filed her dissertation, Exploring Applications of Rootedness in Sociolinguistic Research in Southern Oregon, Summer 2021.

Anna Moroz’s dissertation study, supervised by Betsy Evans, explored the importance of rootedness, defined as orientation towards place, and how it factors into sociolinguistic studies.  The objective of the research was to operationalize rootedness and apply that to research conducted in Jackson and Josephine Counties, Oregon.  These counties, located along the California-Oregon border, have experienced social changes due to in-migration from California and a changing agricultural industry.

Although rootedness is not a new concept in sociolinguistics, it has been infrequently operationalized to understand its role in language change. Rootedness can be operationalized by assigning a value to a person’s level of attachment to their community, based on their attitudes towards that community and plans for their future in the area. This method of quantifying rootedness is akin to the operationalization of other sociolinguistic variables such as age, socioeconomic status, gender, etc., in that it is a grouping mechanism for measuring how shared identities influence language use.  The operationalization investigated questions such as travel, future plans in the area, and attitudes about living in the community. The results suggest that the operationalization differentiates participants on social characteristics that would not be immediately evident based on traditional social variables such as gender and age.

Analysis of a small set of acoustic data of the vowel systems of the respondents in Moroz’s study showed the presence of the low-back merger or near merger, BOOT fronting, BAT backing, BAN raising, and BEG raising for some speakers suggesting some similarity with vowel systems similar to recent descriptions of speakers in Redding, California.  Moroz argued, however, that the use of linguistic features associated with California may not be speakers aligning themselves linguistically with California and/or urban California due to negative discourse about California exhibited by the community. Although correlations between the linguistic variables and the rootedness scores provided by the metric were not significant in this study, closer inspection of subcategories of the rootedness measure were helpful in understanding the respondents’ use of BEG raising. Specifically, strong identification with and investment in local issues suggests less BEG raising, a feature found with speakers in Washington state (in research by Alicia Wassink) and less so with Oregon.