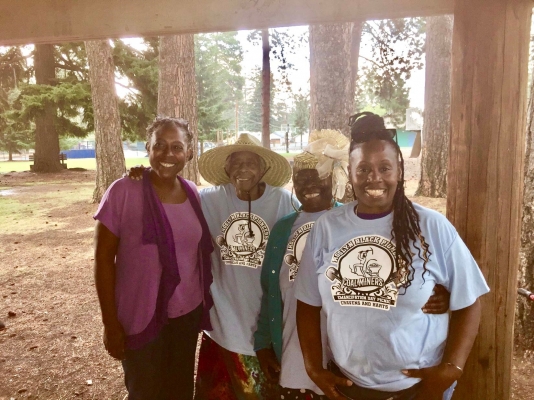 Since PNWE’s beginnings in 2007, the general approach has been to include folks in families that have had a longstanding presence in the Northwest. A central goal of the current phase of Alicia Beckford Wassink's research on Pacific Northwest English is to investigate the sociolinguistic implications of the long history of  interethnic contact and geographic migration that have shaped Washington state. In August 2019, the Pacific Northwest English study team was invited to a picnic with a family of pioneers.

The Craven family’s story goes back generations, further than any family included in the research thus far.  Their ancestors came to Roslyn, a former coal-camp town, in 1888 as part of a group of over 300 black men.  They were promised good wages working in a new mine, but were met with animosity (bricks and rocks) upon entering the town.  Strikers were protesting at the mine, and the men learned they'd been brought to work the mines under false pretenses. Roslyn rose to regional importance when, in June 1975, the city council elected the state of Washington’s first African American mayor, Will Craven.

The former mayor, his sisters and their families have kept up a now decades-old tradition of throwing a picnic each year, celebrating their family’s heritage. Across the afternoon, the PNWE study team heard stories about dangerous mining conditions, daring rescues, and generations-old bonds of friendship between black and white families in Roslyn. The team is grateful to the Cravens and Harts for sharing their stories and voices, quite literally, with them. (Oh, and 1 or 2 of them were gifted with a commemorative t-shirt!)