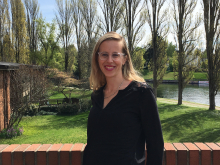 If you combined a Slovenian track star with a neuroscientist, who would you get?

The director of UW’s Language Development and Processing Lab.

Naja Ferjan Ramírez joined the Linguistics Department faculty in Autumn 2019 as a specialist in first language acquisition, brain imaging and related fields.  She holds a Distinguished Professorship in Language Acquisition and Multilingualism.

Ferjan Ramírez got hooked on neuroscience after taking her first course in it at Brown, graduating in 2007. Why Brown? An elite 800-meter runner, she was recruited from the Slovenian national team to run track there.  She explains that in Europe it is difficult to be both an academic and an athlete, but going to Brown allowed her to pursue both passions.

In her 3rd and 4th years at Brown Ferjan Ramírez went deeper into linguistics, a natural development for someone who grew up as a “language dork”, from experiences such as family trips to Italy to buy clothes and Austria for ski trips (her parents were avid skiers) and even grocery shopping.  She then selected Linguistics for graduate school, attracted by the interdisciplinary approaches of the Center for Research in Language at UCSD. She taught German grammar at UCSD for two years, and won a teaching award for that in her 3rd year of graduate school.  Her background in diverse languages (French as well as German, English and Slovenian), along with observation of individual differences in language learning abilities, fueled her research interests in L1.  Her research at UCSD was in delayed language acquisition, specifically of ASL signers, using multiple methodologies, culminating in her dissertation Acquiring a first language in adolescence: Behavioral and neuroimaging studies in American Sign Language (a collection of three published articles).

After graduate school, Ferjan Ramírez spent six years at UW’s I-LABS (at different times Postdoctoral Fellow, Outreach and Education Specialist and Research Scientist), where she learned about “the baby world” from Patricia Kuhl and others.  One of the highlights was her participation in a White House Regional Summit on Dual Language Learners (held in Miami June 2016), an effort by the Obama administration to enhance the language experiences of bilingual learners.

Prior to 2019-2020, Ferjan Ramírez’s previous teaching experience was the aforementioned German grammar class at UCSD.  In her first year at UW Linguistics she taught four classes that were new to her:  LING 200 (Introduction to Linguistics), 441 (Lg Processing and Development), 212 (Infant Brain and Language Development), and 580 (Language Input and the Brain), the last two courses she developed herself.  Although most would consider this a challenging teaching assignment, she had a “great time”, despite having to learn Canvas, supervise TAs for the first time, and adapt to sudden changes in Winter wrought by the pandemic.  She reports that she had “amazing teachers” at Brown and UCSD and now strives to inspire her current students in the same way.